Scottish art has rarely led the avant garde but on the eve of the First World War it did. In 1913 Stanley Cursiter painted a small group of Futurist canvasses, which are contemporaneous with the best work of the Italian Futurists.  This painting, of the glamour and bustle of Edinburgh, is one of them: it is close in style to the work of Gino Severini, in particular. You can make out motorcars, flower sellers, top hats and patent leather shoes as well as the North British clock, the Royal Scottish Academy portico and the towering blocks of the Old Town.

Writing about it in 1975, at the end of his life, Cursiter described his painting to Douglas Hall, then Keeper of the Scottish National Gallery of Modern Art. "The third picture, Princes Street on Saturday Morning is ‘unfinished’ but even if I had completed it by normal standards I could not have added to the impression I wanted to convey – the sense of a ‘fashion parade’ – as Princes Street was in these days." Sadly Princes Street is a ghost of its former self but the painting is a reminder of a more elegant past and a moment when, in the arts, Edinburgh rivalled Milan.

James Holloway CBE (b. 1948) was the director of the Scottish National Portrait Gallery from 1997 until 2007. Prior to arriving in Edinburgh, he had studied History of Art at the Courtauld Institute, where he led fellow students on a march to London’s National Gallery to help acquire Titian's Diana and Actaeon for the nation. His long career with the National Galleries of Scotland began in 1972 when he joined as a research assistant, cataloguing the extensive collection of Scottish drawings. His Welsh roots calling, he left Edinburgh in 1980 for a three year stint as Assitant Keeper of the National Museum of Wales, before returning to the Portrait Gallery in Edinburgh as Deputy Keeper from 1997, and thereafter as Director, until 2012. Whilst Director, Holloway oversaw the landmark restoration and reorganisation of the Portrait Gallery as we see it today.

For his services to the Arts, Holloway was awarded a CBE in 2012. He has presided as a Chairman of the Abbotsford Trust, responsible for the historic home of Sir Walter Scott in the Borders, and currently serves as a Trustee of the Fleming-Wyfold Art Foundation. He has recently published his memoir on the formation and nature of his own personal collection of Scottish art. For more information about obtaining a copy of his book Recollection: Scottish Art from Julius Caesar to Osama bin Laden, please contact info@flemingcollection.com. 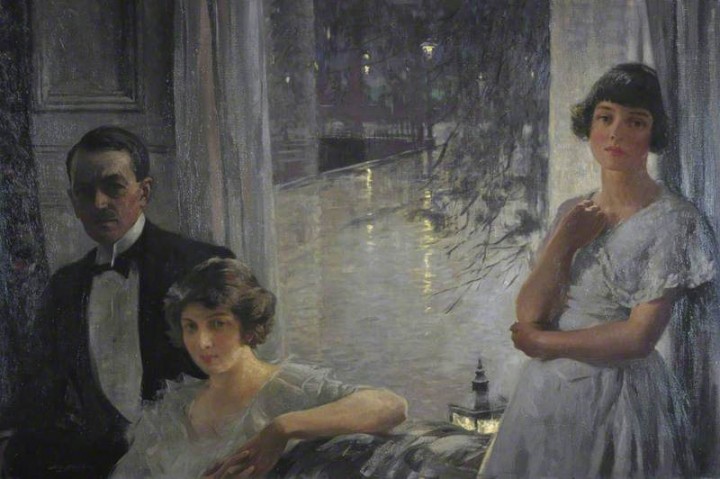 Stanley Cursiter CBE RSA RSW (1887-1976) was born in Kirkwall, Orkney. As a young man, Cursiter moved to Edinburgh to follow a career in architecture, where, after serving an apprenticeship as a lithographic print designer, he was admitted to the newly opened Edinburgh College of Art. He was a keen follower of Post-Impressionism and the Futurist works shown in London in 1912, and on his election to the Society of Scottish Artists he arranged for a part of the exhibition to be shown in Edinburgh the following year, thereby introducing the Scottish public to the works of Cézanne, Gaugin, Matisse and Van Gogh. Cursiter was elected a Royal Scottish Academician in 1937.

Not only was Cursiter one of Scotland's most prolific painters, particularly of portraits, he also became a visionary gallery curator and administrator, with an appointment in 1925 as Keeper and then in 1930 as Director, of the National Galleries of Scotland, and eventually initiating the campaign for a Scottish National Gallery of Modern Art. In 1948 he was appointed as the King's (later to be the Queen's) Painter and Limner for Scotland, a position held until his death whilst working full time as an artist in his native Orkney. Having experimented with Futurism and abstraction in his art, he is more prominently known for his realism in landcapes and portraiture.