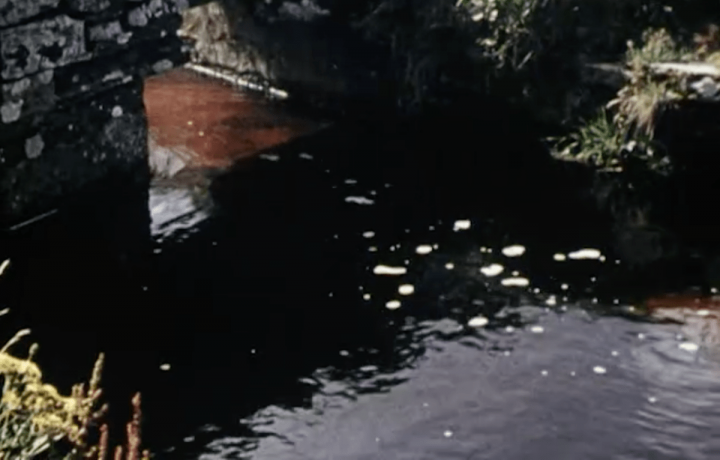 Margaret Tait’s Orquil Burn is a work I’ll never tire of. I might have an Orcadian bias towards Tait’s work but I love this film specifically, not because it depicts the islands, but for the mission it undertakes. The film sees Tait take us along the path of the Orquil Burn in Orkney, in the hopes of finding its source.

From the point at which the burn meets the sea at Scapa, we follow its course, all the while becoming intimately acquainted with its waters, bubbling, gargling, gushing, striped with scum and glistening. We also encounter broken parts, the attempts of humans past and present to alter its shape and draw power from its strength. The effect is like meeting an immense beast over the course of 35 minutes, serpent-like, who crawls through time unmoved.

What keeps me looking and watching is that, every time, the mission proves futile, the burn has no one source! In Tait’s own words, "the area of wetness – of water lying on the ground and trickling downhill – was wider and wider. I had expected to find ‘a source’, but it turned out that the sources were many, the origins widespread; and there was no particular point at which I could say ‘this is the source of the Orquil Burn’."

I was labelled ‘evasive’ at art school and whether it is the burn denying Tait her answer, or Tait denying the viewer, it is left open-ended in a way that I love. 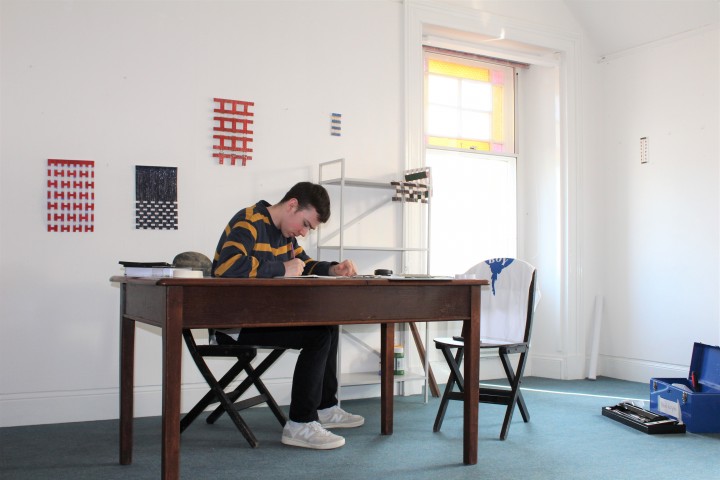 Brandon Logan in his studio. Courtesy the artist.

Logan is an artist based in Stromness, Orkney, where he was born. It was here as a boy that he first encountered the outstanding collection of British Modernism at the Pier Arts Centre that would become an influence on his practice. Logan later moved to Edinburgh to study art and hitsory of art at the University of Edinburgh, where he relished the oppurtunity to move between the two disciplines of the academic and the practical.

Since graduating in 2019, Logan returned to his Orcadian home town to continue his artistic practice. He has achieved notable successes as an emerging artist, with a solo exhibition of work at Zembla Gallery, Hawick, in 2019, and his inclusion in the Royal Scottish Academy's prestigious 'New Contemporaries' exhibition in 2020. Around the same time, the Fleming-Wyfold Art Foundation advised Scotland House on an inaugural award that named Logan as the 'Emerging Scottish Artist of the Year' in 2020. More about his practice can be read in this in depth profile by Susanna Beaumont. 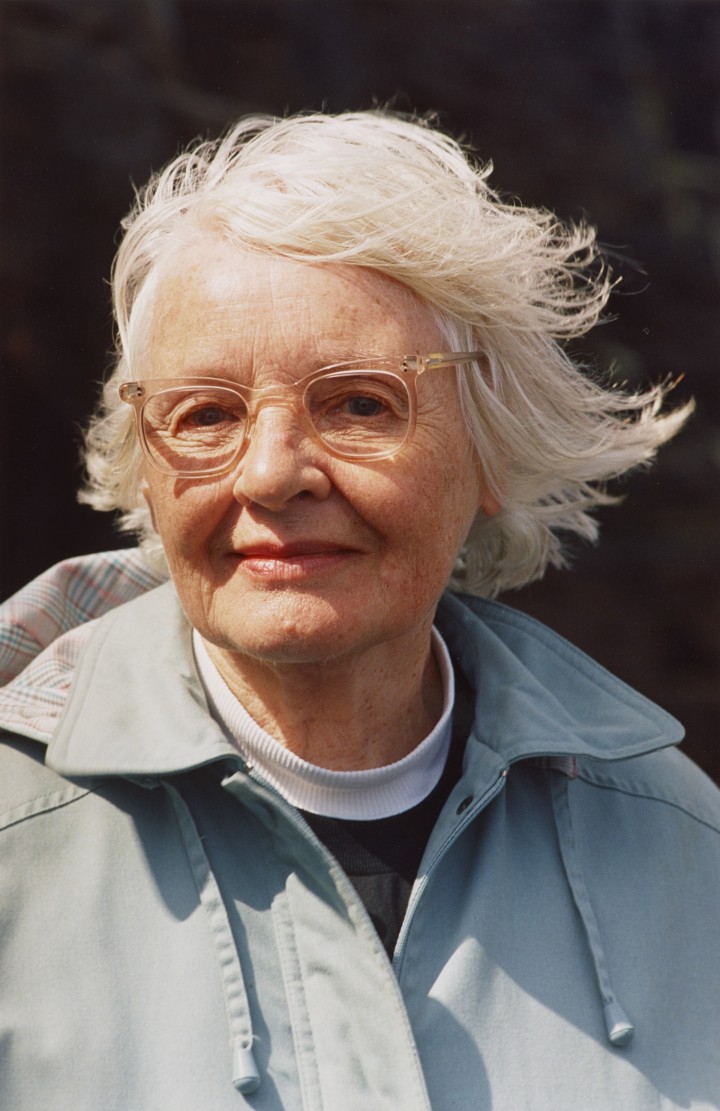 Tait was an Orcadian film-maker, writer and artist. She was born in Kirkwall, the capital of the archipelago, and later moved to Edinburgh, where she studied medicine at the university. This led to her joining the Royal Army Medical Corps, in which she served in India, Ceylon and Malaya. Her photography began to develop on these trips, compiling photo albums of her visits Kashmir, Agra, Delhi and Kandy. Changing paths, from 1950 to 1952 she studied film at the Centro Sperimentale di Photographia in Rome, leading to her establishing the production company Ancona Films on her return to Edinburgh.

In the 1960's Tait moved back to Orkney where over the following decades she made films inspired by the Orcadian landscape and culture. Her works were subsequently shown at screenings at National Film Theatre, London, Berlin Film Festival, Centre for Contemporary Art, Warsaw, Arsenal Kino, Berlin, Pacific Film Archives, San Francisco, and Knokke le Zoute, Delhi. Tait was given a retrospective at the 1970 Edinburgh Film Festival. Her only feature length film, Blue Black Permanent (1993), opened the Edinburgh International Film Festival. Margaret Tait's Orquil Burn can be watched on the National Library Scotland's Moving Image Archive.