A Glasgow boy choosing the work of Joan Eardley might seem a tad predictable but let me explain.

Both my parents were born and raised in the old district of Townhead, though my childhood was spent on the salubrious streets of Dennistoun, just to the east. Throughout the fifties there were two ways through Townhead into the city centre. One was by tram, along Parliamentary Road, the other by bus down Cathedral Street. That last route would take me past a strange building squeezed between the gables of two tenements which always intrigued me. It was lower than its neighbours and the top floor seemed entirely glazed, though the glass was almost opaque from the soot that marinated the whole district. My father remembered it as a photographers studio but was sure it was now derelict. It certainly looked it.

Many years later Eardley’s biographer, the late and much missed Cordelia Oliver, told me that it had been the artist’s studio throughout these years. I was thrilled to realise that I may have been on the other side of that grubby glazing while she was creating those now famous portraits of the Samson family. Like Zelig, I could have appeared and eavesdropped on their affectionate and creative relationship. 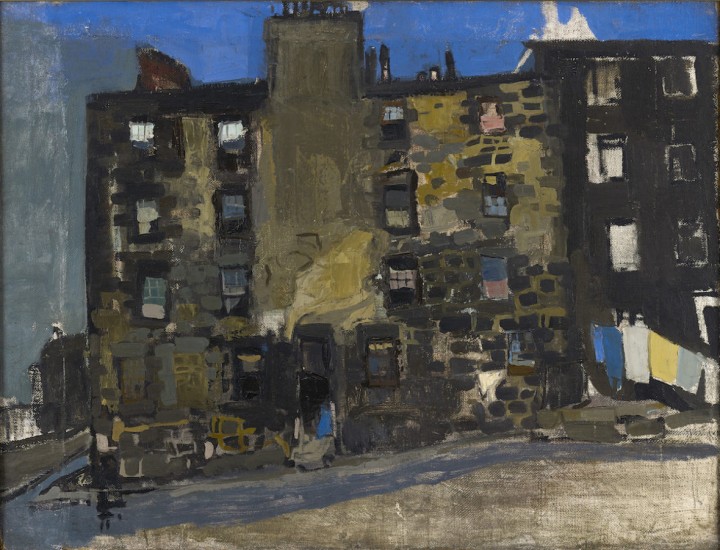 Around the same time I got to know Oscar Marzaroli, the great photo chronicler of the time. He was much inspired by Eardley and took that delightful photo in the studio. His photographs of Glasgow in transition are legendary.

Her tragic early death in 1963 meant that Joan was spared the full catastrophe of that transition. Like much of inner Glasgow, Townhead appeared to have been carpet-bombed rather than redeveloped. Very little survives of the district that she, and my mother and father, knew, but at least we have these evocative paintings of people and streets. I’ve chosen one of her pastels of these long lost tenements.

A lifetime later I was lucky enough to meet the painter Faith O’Reilly, who now lives and works in southern France. She tells of leaving the RA to join Lilian Nielson, who cared for Joan in her last years at Catterline. Faith stayed on for years, steeped in the benign yet challenging artistic community on that wild north eastern seaboard. Joan Eardley’s work truly encompassed the extremes of Scotland. Old Townhead and her ramshackle studio have long gone. Catterline and her work have endured.

Bill Paterson (b. 1945) is a Glasgow-born actor, who came to acting as if by accident. He began a career as a quantity surveyor before changing course to become a drama teacher, having nurtured a love for the theatre in his teens. His professional debut in acting was in 1967 at the Glasgow Citizens Theatre, graduating from Glasgow School of Drama in 1969 and then spending much of the 1970s as part of John McGrath’s touring theatre company 7:84, of which he was a founding member, appearing in renowned productions such as The Cheviot, The Stag and The Black Black Oil. He also appeared in John Byrne’s first play, Writer’s Cramp. His theatre career took him to London's West-End, earning him a nomination for a Laurence Olivier Award for his role in Becht’s Schweyk in the Second World War (1982).

Joan Eardley (1921-1963) was born in Sussex and studied art briefly at Goldsmiths College before moving to Glasgow at the beginning of WWII. She trained at Glasgow School of Art before taking a wartime job as a joiner's labourer, returning to the post-diploma course in 1948. Van Gogh, Vuillard and Bonnard influenced Eardley's early draughtsmanship and choice of domestic interiors, while the influence of Henry Moore and early Italian renaissance masters brought a sculptural weight and humanity to her figure compositions. Inspite of these influences, Eardley's style remained individual and conformed to no particular schools. Her unique vision has earned her the reputation as one of Scotland’s greatest twentieth century painters.

Eardley began working in her Glasgow studio in Townhead in 1949, above a scrap-metal shop. The once handsome district of Townhead was by then an overcrowded, poverty stricken area in the city, which succumbed to the brutal redevelopment programme of the city planners. Eardley took a different viewpoint, documenting the tenement slums and the locals with warmth and humanity. In contrast to this setting, in 1950 Eardley discovered the small fishing village of Catterline, near Stonehaven, Kincardineshire, also a tight-knit and resilient community. From then on she divided her time between her studios in Glasgow and Catterline, the localities of both becoming her main subjects. Eardley was elected ARSA in 1955 and RSA in the spring of 1963.

Artworks by Eardley that are held in the Fleming Collection can be viewed here. From May 2021, a series of exhibitions and events will mark the centenary of Eardley's birth. Visit JoanEardley.com to find out more about these events.