Sulaïman Majali, the recipient of this year’s Margaret Tait Award – commissioned by LUX Scotland since 2010 to support experimental film and moving-image in Scotland – was born in 1991 but lists four other dates of birth spanning several centuries. They describe themself as “an artist poet who brings into play rupturing, grieving and dreaming as methodologies of collapse”. Majali is, seemingly, an artist for whom a certain obscurity of gesture is a creative and ethical imperative.

Outlining the decision behind this year’s award, panel-member and artist Jamie Crewe describes Majali’s work as “imagistic”, providing some context for their “poet artist” tag. In Amy Lowell’s 1915 formulation of Imagist poetry, the work in question should “render particulars exactly and not deal in vague generalities, however magnificent and sonorous.” Lowell’s Preface to Some Imagist Poets goes on to enumerate various stylistic maxims, notably the need “to produce poetry that is hard and clear, never blurred nor indefinite...concentration is the essence of poetry.”

Majali is not an artist who could be said to deal in generalities. Their video and mixed-media work tends to consist of fragments of almost unassimilable data, including, in different cases, broken household items, copies of paintings and manuscripts degraded through reproduction, aphoristic written statements, and arcane mathematical diagrams. The difference between this bricolage-type practice and the products of the early Imagist movement – to spin the analogy out – is that the “particulars” comprising Majali’s work are not self-sufficient in meaning. Instead, they seem to cluster together into networks of faint association, each item suggesting a trace of historical or cultural context but also suggesting a kind of tenuous dialogue with those encompassing it. 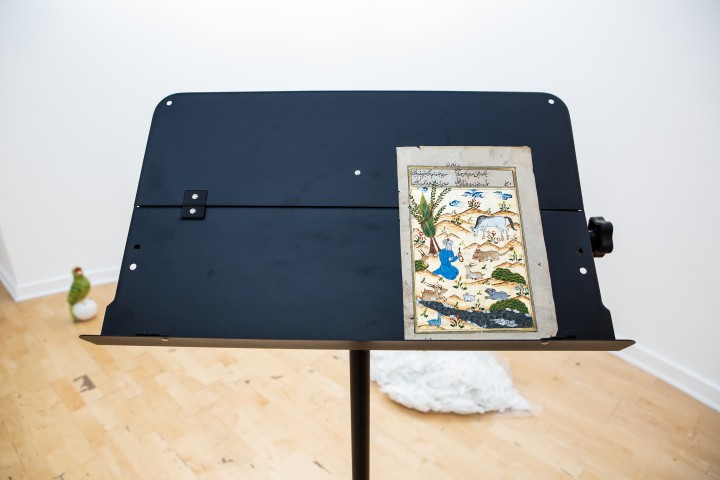 In the case of Majali’s current display at the Talbot Rice Gallery – part of this year’s Talbot Rice Residents exhibition – the objects in question include a 19th-century fake of an illuminated miniature showing Solomon conversing with animals, a giant chess piece hidden in rubble sacks, bags of white gloves, a shard of rock with an X sandblasted into it, and a “print of a scan of a scan” of William Holman Hunt’s 1854 watercolour Arab resting by a stream—which is also the title of Majali’s installation. Such compositional methods, with their conceptual fissures and fractures, are also prefigured by modernist poetics, including the grand, obscure vision of Ezra Pound’s cantos. But while Pound’s post-Imagist opus shores up fragments of post-classical western history to propose a conspiratorial, anti-democratic origin myth for the moral sickness of modernity, much of Majali’s material serves as a portal to historic Arabic civilisations terminated or broken up by the incursions of Western empire.

The attendant atmosphere of Majali’s three-dimensional arrangements often approaches that of a waiting room or antechamber, some cosmic holding bay where a mass of objects awaits deciphering and sorting into more coherent form. This ambience was most clearly expressed in the 2020 show at Collective, Edinburgh Saracen Go Home, for which the gallery was reimagined as an empty auditorium, scattered with objects and filled with rows of spring-back seats: somewhere between an abandoned lecture theatre and an immigration centre. Works like these seem at one level to cry out for clarifying analysis. But such a gesture would also dispel some essential quality of mystery, a resistance to rational closure implicitly associated with the violence of colonial encounter.

Nonetheless, the inventories included with Majali’s exhibitions, notably Saracen Go Home, do suggest the basis of a speculative critical framework. In this case, listed items include diagrams “from Ibn al-Haytham’s demonstration of geometric optics applied to the study of a partial solar eclipse using the early camera obscura” and “a diagram illustrating a method proposed and used by al-Biruni to estimate the radius and circumference of the spherical Earth.” As Hussein Mitha writes in a review of this exhibition for Frieze, such materials refer to the advances of Arabic science and mathematics prior to the vaunted achievements of the European Renaissance. They are combined with images reflecting contemporary Islamophobia and anti-Muslim violence at both interpersonal and state levels, from Guantanamo Bay to a Scottish mosque graffiti’d with the slur taken as the exhibition’s title: “Saracen Go Home.”

On this evidence, Majali’s work might propose a layering or collaging of fragments suggesting different possible versions of global history and reality, including traces of an unrealised, alternative present unfettered by the legacies of colonialism. The artist’s reference to “folds” and “creases” in reality allude to the resultant, haunted quality of much of their work. This is particularly evident in audio and video pieces which include spoken and whispered soundtracks, notably Cyphers in the Dream (2019), which begins with the artist intoning on the nature of “the world and its various creases”. The figure of an X etched into stone, which reappears across various projects, serves as a motif of sorts for the practice as a whole, alluding both to the algebraic formulae of Arabic scholar Al-Khwarizmi and to some integral quality of unknowability.

For their new commission, Majali proposes “a new experimental non-narrative moving-image work.” The artist will use resources gathered from Andalucia, Vienna, and Istanbul alongside new research in various sites across Jordan, Scotland, and England, engaging with themes ranging from biblical narrative to middle-eastern folk tales.

Sulaïman Majali’s work is exhibited in Meet me at the threshold at Talbot Rice Gallery until Sat 21st May. You can find out more about The Margaret Tait Award here.