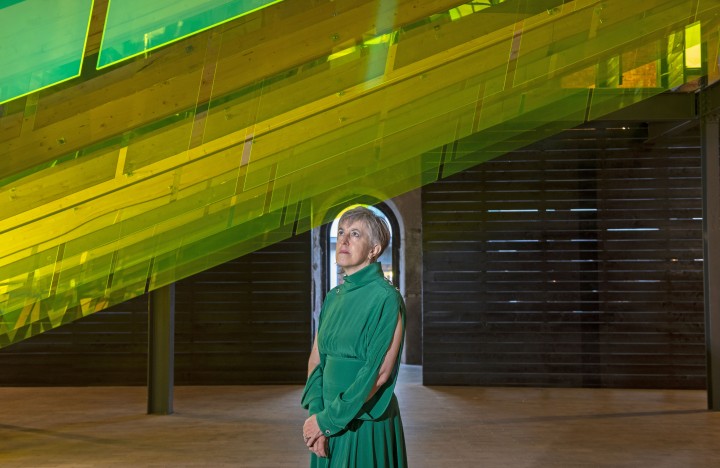 Jyll Bradley and her installation at the Fruitmarket. Image: Neil Hanna.

Jyll Bradley’s Pardes is the first stand-alone project for the Fruitmarket's new warehouse space, flooding the girder-filled chamber with shafts of neon.

If the mantra of minimalism is that “what you see is what you see” then Jyll Bradley is not a minimalist in any easy sense. Far from banishing metaphor, her practice is fed by a deep wellspring of symbolism, with a particular emphasis on horticulture—on emulating the homemade structures used to cultivate plants and fruit. Since her return to artistic practice around the late 2000s – following a successful spell as a radio scriptwriter – this emphasis has been borne out through a series of striking projects woven around memories of a Kentish childhood.

For her Folkestone Triennial project Green Light (for M.R.) (2014), Bradley converted part of a disused gasworks in her home town into an old-fashioned hop garden, its wood-and-wirework scaffolding extended and varied through an inner grid of light-reflecting aluminium poles (imagine Walter De Maria’s Lightning Field re-envisaged as a bucolic idyll). Brigitte (2017), an arrangement of neon chevrons mounted on the brick gable of Strange Cargo arts space in Cheriton, Hampshire, emulated the “espalier” method of planned shrub and plant growth, involving pinning limbs and branches to a trellis.

The Fruitmarket’s recently acquired two storey-high warehouse space, converted by Reiach and Hall into a bare-bricked, strut-filled cavern, is the site of Bradley’s latest paean to agricultural constructivism: farm-follows-function, if you will. The gloom-filled grandeur of the space suits a large-scale intervention like Bradley’s: a set of six diagonal beams extending from floor to upper wall, each mounted on one side with notched, counterpointed strips of neon green and grey plastic. The “live edge” of the translucent Perspex, machine cut for that classic minimalist-industrial effect, is intended to channel the light gathered into the surface of the plastic and spread it outwards through its edges. Although this effect is hard to discern on the stubbornly grey day of my visit, the work interacts with its surroundings with confidence and clarity, replete with a ballet of dancing light flecks from various ambient sources.

According to Fruitmarket, “the form of Pardes is a hybrid of many structures and patterns that Bradley encountered during her research into the history of Scottish fruit production. The particular climate of parts of Scotland – from haars (sea mists) to vertical rain – has meant ingenious means of creating the conditions necessary for fruit growing.” Bradley became particularly interested in orchards mirroring the slope of the land in areas such as the Clydesdale Valley, and in lean-to structures used to train fruit trees up heat-retaining brick walls. The resulting half-arch effect not only pays homage to the site’s history as a fruit and vegetable market but also – perhaps inadvertently – echoes the flying buttresses of gothic cathedrals, a suitably Edinburgh-centric reference.

Blankets and books are provided on a series of benches spread around the perimeter, reflecting Bradley’s hope that her work will serve as a site for gathering, interaction, and play. It will also be the site of various film-screenings, performances, and other events across the next few months. The title of the work, Pardes, come from an ancient word for orchard or garden, at the root of the word “Paradise.” On a dreich day in December, it certainly provides comfort and illumination.

Jyll Bradley's Pardes will be shown in the Fruitmarket's Warehouse until 18th April 2022.