The snow fell deep recently on Scottish Sculpture Workshop, the Aberdeenshire based centre of ‘making and thinking’ that celebrated its fortieth anniversary just a few short months before the first lockdown brought on by the ongoing Covid-19 pandemic. While the latter has forced SSW to temporarily close to the public in line with social distancing regulations, neither Covid nor the elements have prevented SSW director Sam Trotman and her team from making plans for what might turn out to be a very different future.

This is clear from the just announced series of residencies that will see SSW collaborate with Glasgow based contemporary music festival, Counterflows. With artists Laura Bradshaw, Chris Dooks and Hang Linton taking part, the series focuses in different ways on notions of caregiving, what such concerns bring to the artistic process, and vice versa.

The caregivers residency programme has been a long held ambition for SSW, and chime with a recent survey by Scottish Contemporary Art Network highlighting how the pandemic has taken its toll on the visual art community. Somewhat ironically, it is only the time and space afforded by lockdown that has enabled the ideas to be brought to fruition.

“I’ve wanted to try and facilitate it for a while,” says Trotman, who joined SSW in 2016 following her work as education producer at East London based producing organisation, Artsadmin. “Normally you’re always working flat out, and it’s a case of, right, what’s next. But when that all stops, as it has done since lockdown, you can try and realise those things you might not always have time to think about.

“With other residencies, we’ve noticed that the majority of applicants are young single artists, and we wanted to try and broaden access to residency. Care is something that is spoken about quite a lot, but what’s interesting in our situation is what happens when you put it at the centre of things, and your whole way of doing things has to change.”

Some of the thinking behind the residency programme stems from Trotman’s first hand experience of SSW prior to her appointment, when an informal sense of inclusivity was already in place.

“I came to know SSW when I first came with my three-month-old,” she says, “and there was a real sense of the SSW team coming together to support that. There was a feeling that you could just turn up with everything, and people sorted you out whatever. It made me realise that other people in my situation didn’t have the privilege to do things like that.”

Scottish Sculpture Workshop was founded in 1979 by sculptor Fred Bushe in a former bakery in the village of Lumsden, population just shy of 400 at the last count. Set between the foothills of the Cairngorm mountains and the northeast Moray coast, SSW has been at the forefront of sculptural activity in Scotland.

Others following in its wake include Edinburgh Sculpture Workshop and Glasgow Sculpture Studios. Out of this came Scotland’s Workshops, an informal nationwide network of eleven visual arts production facilities that operate independently while sharing knowledge and resources. Outwith those in the central belt, other centres include Peacock Visual Arts in Aberdeen, North Lands Creative in Caithness, and Highland Print Studio in Inverness. 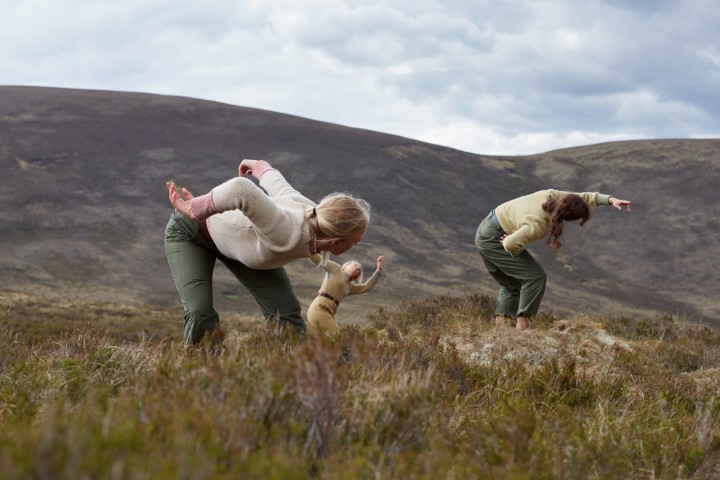 Following Bushe’s tenure, subsequent SSW directors Chris Fremantle, from 1996, Hilary Nicoll, who took over in 2003, and Trotman’s predecessor Nuno Sacramento, have widened the centre’s scope. As with SSW’s near neighbour, the Huntley based Deveron Projects, Joseph Beuys’ ideas of social sculpture have become paramount, with the caregivers residencies arguably the logical result of such thinking.

Since Trotman’s arrival at SSW, she has driven an increasingly expansive programme. This has included Into the Mountain (2017-2019), a place sensitive performance project by choreographer Simone Kenyon inspired by Nan Shepherd’s 1974 book, ‘The Living Mountain’.

Beyond the caregiving residencies, set to take place under social distancing guidelines throughout 2021, Trotman and SSW have ambitious long term plans to renovate the workshop spaces and develop a new community maker space. With the Collective Architecture company, whose previous projects include Glasgow Women’s Library and the Collective Gallery in Edinburgh, on board to drive this, rather than creating a shiny mega structure, any new developments have a more practical aim.

“It’s about stuff that affects people locally,” says Trotman. “At the moment nobody knows where the front door is, so we want to shift the orientation of the building and make it more welcoming.

“Everyone realises the essence of the place is to work bespokely with people. We don’t want to grow bigger so we can’t give the amount of attention to people that’s needed. We want the workshops to feel accessible and welcoming to people who might never have had access to workshops before, or who might be put off by big scary industrial spaces.”

Above all, for residents and workshop participants alike, SSW offers a space to explore, whatever the weather.

“I think when people come here there’s a real sense of possibility,” Trotman says. “You can go for a walk up a hill, look out and think, I can do anything. There are probably very few places in the world you can do that. Every day when I go in to SSW I feel amazed by that. As long as our artists feel that sense of possibility, that’s what keeps us going.”