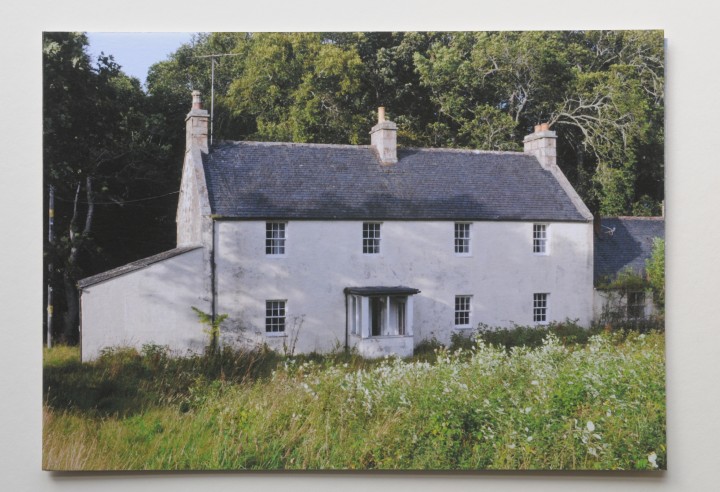 In the Spring of 1965, Ian Hamilton Finlay and his collaborator and partner Sue Finlay left Edinburgh for the village of Ardgay, on the shore of the Dornoch Firth in the Northern Highlands. Finlay would not return to the Scottish capital for three decades. His time in Edinburgh, where he had moved in the late 1950s, had been punctuated by bouts of nervous illness, psychiatric treatment, and restless movement between addresses.

The relocation to Ardgay, therefore – or rather to a large, two-storey farmhouse just inland of the village, on the grounds of Gledfield Estate – was undoubtedly the start of a healing process. It was also arguably the point of origin for the evolution of Finlay’s practice from literature into visual art. By 1965 he was already the most celebrated British exponent of the international style known as concrete poetry, whereby words and language-forms were arranged visually on the page. But settling on a large rural estate, with the grounds and wall-space, not to mention the peaceful ambience, required to realise his visual-linguistic constructions in three dimensions, was clearly revelatory. 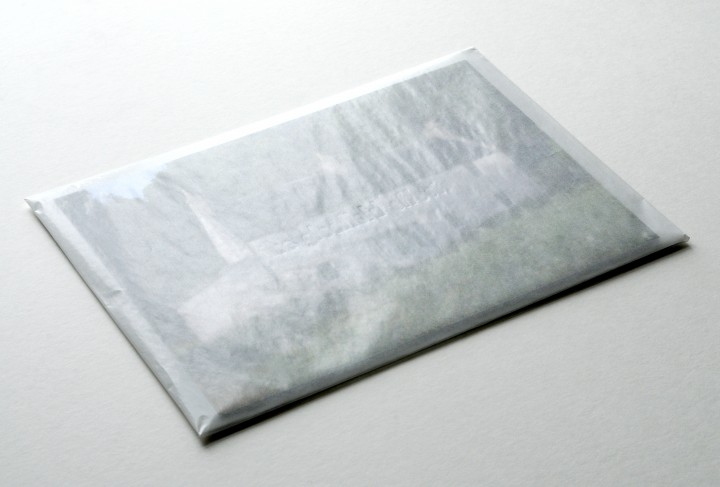 The Finlays’ time in Ardgay was cut short by quarrels with their landlord, and by the following summer they had moved out, living briefly in rural Fife before settling in September 1966 at Stonypath Farmhouse in the Pentland Hills, now widely known as Little Sparta. But the year at Gledfield Farmhouse nonetheless proved creatively rich. Indeed, it was here that Finlay’s vision of a poet’s garden first began to find concrete and organic expression: ponds were dug, much like those that now enclose the vistas at Little Sparta, and his first largescale sculptural and land-based works were constructed. Finlay also created wall-mounted versions of at least two concrete poems, To the Painter, Juan Gris and Acrobats, using cork letters grouted to the farmhouse’s harled outer walls. Both poems had been published on the page, but the latter was specifically devised as a mural poem, while To the Painter, Juan Gris had been reworked in sandblasted glass the previous year, an early example of Finlay’s realisation of single poems across multiple contexts and media.

Alistair Peebles’s Orkney-based imprint Brae Editions has now created a beautiful memorial to the transportive poetic environment that Finlay began to create at Gledfield. The Gledfield Effect appears as part of the second instalment of Posted/Unposted, a multi-part book-art series curated by Codex Polaris, designed to showcase the work of small presses in Scandinavia, and latterly Britain, using creative letterpress techniques. Peebles’s contribution makes use of both the deep critical and biographical knowledge he has accrued over a decade or more’s research on Finlay – lithely relayed in the illustrated essay, “One Has to Work at a Place…”, that accompanies the publication – and his affinity as a publisher for the minimalist craft aesthetics of Finlay’s own Wild Hawthorn Press. 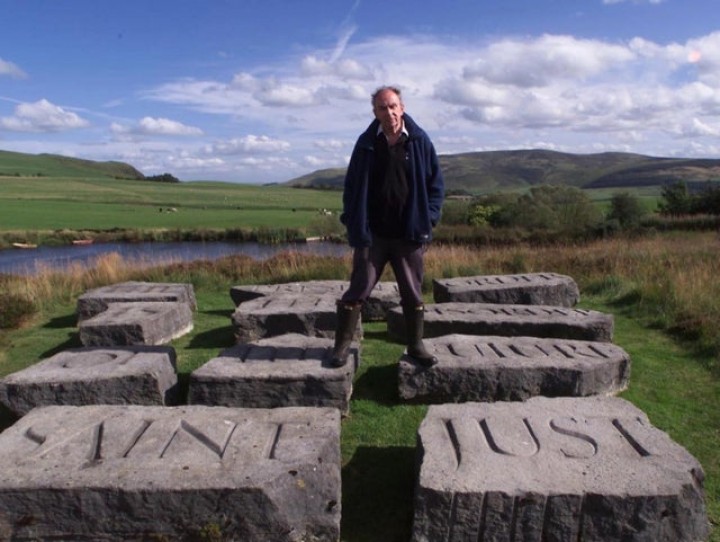 The premise is simple but beautiful: a translucent envelope, reverse embossed with the title phrase, contains a set of four colour photographs of the house and surrounding landscape, printed on card, with front-sheets of see-through glassine superimposing poems or quotes of Finlay’s from the Gledfield era onto the images. The concept is most arrestingly realised in the case of Finlay’s two wall-poems, which appear perfectly positioned on the front and side-walls of the farmhouse, only to be peeled away by a turn of the page: a fitting homage to Finlay’s creative utilisation of the physical dynamics of reading through his 1960s booklet-poems, and a poignant evocation of a creative endeavour abandoned, or at least deferred. What is most startling about the photographs, however, is that the rectangular patches of smooth plaster applied as backings for the poems remain clearly visible on Gledfield’s walls, evoking the house’s brief conversion into a temple of poetry (until Peebles’s discovery of these last year, received critical wisdom was that no physical evidence of Finlay’s residence at the house survived there). This book crystallises the atmosphere of benign ghostly possession that still pervades the environs of Gledfield and serves as a final creative reworking of two of Finlay’s iconic early works.

The Gledfield Effect by Alistair Peebles is published by Brae Editions, Harray, 2020. It will be available to order from 11th July for £15.00 + P&P from James Fergusson, Books and Manuscripts or by contacting the publisher.