“Naboland”. That rings a bell, but I can’t see it on the map and can’t remember exactly where it is. From the images, we can see that it seems to be a perpetually icy territory, with much in common with Greenland. It remarkably appears to have maintained its freedom from encroaching financial and territorial forces. I would say that it is still waiting for “civilisation" were it not for the fact that “civilisation” and “exploitation” go hand in hand.

We have images that mark its discovery and its fundamental innocence. We see an explorer’s hut, densely packed with disorderly order, hearing sounds of blustering wind and elusive words from a crackling radio. There are echoes of Amundsen, Scott and Shackleton and their successors, when heroic exploration was the name of the high-risk game. As we near the hut, we realise that it is tailor-made for explorers of smaller stature than us. We are not only intruders to Naboland itself but also into the doings of the diminutive explorers.

The hut becomes a kind of Wunderkammer, the name given to German cabinets of curiosity that pre-dated the classificatory categories of our modern museums. The earliest records of the wondrous territory date from a full half-century ago.  We have prints of the adventures, in Boy’s Own style. We have relics of the intrepid explorers, in the form of collections of evocative and time-worn objects that have been preserved and recorded immaculately in ink and paint: bones, feathers, shells, mittens, cloths, ragged dolls, spoons, keys, bottles.  We also learn to our surprise that Naboland invented golf, a claim that is strongly resisted in St. Andrews.

Why is this remarkable land not better known?

Naboland, as you may have guessed, is an imaginary country – invented by the Scottish artist, Reinhard Behrens (born in Germany), a long-term resident of Pittenweem in Fife. Naboland and other territories have been explored by a venerable toy submarine whose stoic mariner has endured sub-zero temperatures in Naboland and scorching sun in African deserts. Sometimes the craft takes to the air. In Cold Encounter, the colourful if abraded submarine is regarded with bemused curiosity by squads of penguins, who “fit’ into the vista of ice peaks in a natural way. An oil leak may signal something alien is potentially in the offing. We now look at the peaks of ice with an awareness that they are vulnerable.

Behrens’s earliest fantasies predate our growing awareness of climate change, but he already had a clear sense of “the irreconcilable meeting of human enterprises and nature”. He is concerned that the story of Naboland should retain its relevance in the light of the overwhelming dread of pressures on the life we have all come to take for granted. To think that it should fall to our generation to try to make amends to what appears to threaten all of us through the climate emergency, with war just being a devastating distraction from our real task to secure the survival of our interdependent life forms.

It is no surprise to find the submariner recently navigating his precarious way through an ocean of COVID viruses in the guise of naval mines. Homo sapiens is an exploratory species. What we find is wonderful, but we interfere at our peril, as the submariner comes to realise over the years. 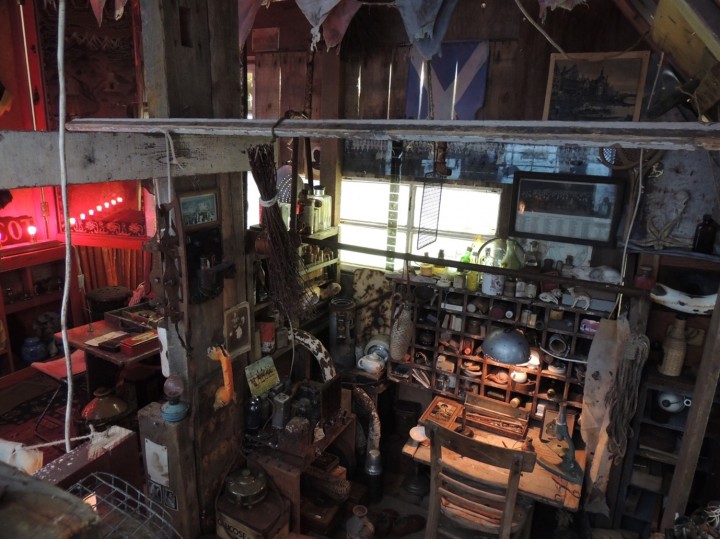 Reinheard Behrens (b. 1951) was born in Germany and studied initially at the Hamburg School of Art. A post-graduate course at Ediburgh College of Art brought him to Scotland in 1979, where he has remained ever since, working as a lecturer at ECA, Grays School of Art and Duncan of Jordanstone College of Art and Design. From 1989 to 1992, he stood as the President of the Society of Scottish Artists. He now lives and works from his home in Pittenween, Fife.

Behrens began his Naboland creation when working as  an archaeological draughtsman in Pergamon, West Turkey, in 1975. A Turkish newspaper reported the collision between a submarine and a cargo ship named Naboland. The pictured submarine reminded the artist of a toy submarine that he had found on the German North Sea coast the previous year and the combination of this name and image inspired the exploratory project to come. Behrens has described how a particular British sense of humour and appreciation of whimsy was instrumental in the longevity of Naboland in his practice. Forty years on, Behrens is now working on the production of a short animation film to give further final proof of the existence of this invented land of Naboland.

Professor Martin Kemp HRSA (b. 1942) is an art historian and one of the world's leading authorities on the life and work of Leonardo da Vinci. Having studied natural sciences and art history at Downing College, Cambridge, he went on to write and broadcast extensively on imagery in art and science from the Renaissance to the present day. He is an Emeritus Research Professor in the History of Art at Oxford University, having previously held posts at University of St Andrews and University of Glasgow.

Leonardo has been the subject of a number of Kemp's books, including Leonardo (Oxford University Press, 2004) and the semi-autobiographical Living with Leonardo (Thames & Hudson, 2018). His most recent book, Visions of Heaven: Dante and the Art of the Divine, is published by Lund Humphries. Kemp will be presenting the Sir William Gillies Memorial Lecture at the Royal Scottish Academy on 25th May where he will be discussing David Hockney, focussing on an exhibition curated by himself, Martin Gayford and Jane Munro. For more info and tickets visit the RSA website.