Katie Paterson: Past, Present and the Future Library 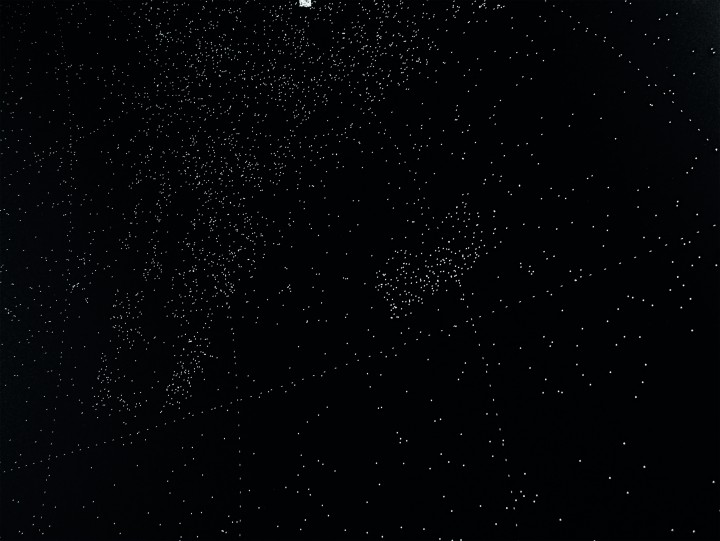 Katie Paterson’s universe is expanding. This is evident from Future Library: a century unfolds (2019), the Glasgow-born cosmic explorer’s new 26-minute film commissioned by the National Galleries of Scotland. The film provides the spiritual heart of the final edition of NOW, the Scottish National Gallery of Modern Art’s sextet of group-based exhibitions designed to show off the best of living artists working in Scotland’s creative diaspora.

Paterson’s film documents the six years so far of Future Library, the artistic and cosmic explorer’s epic century-long undertaking to bring together a new text a year by 100 different writers that will be kept unread in Oslo, where a forest was planted in 2014 which will provide the paper for all 100 volumes to be published in 2114. The first writer to be commissioned was novelist Margaret Atwood, who appears in the film alongside Paterson and the other five authors.

‘We wanted to make the film for this show to bring Oslo here and bring the project here, because Future Library exists in many forms,’ Paterson explains. “There’s the forest, the room, the manuscripts, the authors, architects, librarians and so on, but it’s hard to get a grasp of all the different things that bring it together, so that’s one of the reasons why we made the new film for here.

‘It’s really documenting the whole thing so far, and taking a bit of a longer viewpoint on it, because year by year, we’ve been too involved to actually step back and think, here we are, the room’s opening and we’re really rolling with the project now. And for me to witness this – one year I’m pregnant, the next year I’ve had my baby, the next year he’s grown up, and of course, when I bring him this year, he’s going to be completely changed again – my life changes with that project. My whole family’s involved. I live my life alongside it, and it’s really nice to witness those changes in the film.’

The final NOW also featuring satellites of work by Darren Almond, Shona Macnaughton and Lucy Raven. It is Paterson’s creations from past, present and future, however, that form the centre of the show. This is the case from the Zen-like aspirations of the 18 texts selected from ‘Paterson’s Ideas’ (2015–ongoing), a series collected in her recently published book, A place that exists only in moonlight, and here arranged on the gallery corridor wall in spacey silver letters. In the exhibition’s final room, ‘The Cosmic Spectrum’ (2019), is a large spinning wheel which features all the colours of the universe since the dawn of its existence spinning in one continuous cycle.

Ten other pieces similarly move through time, space and the sky at night. These include Totality (2016), a disco mirror ball containing more than 10,000 images of solar eclipses that beams out across the room. The sound of Beethoven’s Moonlight Sonata permeates throughout the gallery by way of Earth-Moon-Earth (Moonlight Sonata Reflected from the Surface of the Moon) (2007) in which a self-playing piano plays a version of Beethoven’s tune after it was beamed into space using Morse Code. The presence of Future Library: a century unfolds is marked by an accompanying print of a certificate that entitles the National Galleries of Scotland to a complete set of the texts that result from the project, once they are published in 2114.

‘Even though it’s year six of Future Library, it’s still the beginning,’Paterson points out. ‘We’ve still got another 94 years to go, so it’s a project that will outlive me, and will outlive everybody I know, except hopefully not the really young generation. Future Library is one of the biggest artworks I’ve ever worked on, and possibly ever will, because it goes on and on and on throughout my whole lifetime, and it’s got all these different elements. When you’re in the forest it’s one thing, when you’re in the library it’s another, and watching a documentary film about it is another thing, but it does bring you closer to it and brings you into this essence of what’s going on, which is all related to time and space and light.’

The week before the opening of NOW, Paterson flew to Frankfurt, where she shared a stage with Margaret Atwood to announce the name of this year’s Future Library author, Karl Ove Knausgard, the controversial author of My Struggle, a forensic six-volume warts-and-all dissection of his own life, published between 2009 and 2011. ’It’s a big deal,’ Paterson says, ‘because it’s the year we’re opening a whole new library in Oslo, and he’s the first Norwegian author.’

NOW, then, brings together the different aspects of Paterson’s increasingly infinite universe. ‘Curating it and installing it, it is a bit like a constellation in a way,’ she says, ‘because you’re taking what for me have been very separate works to make, but they do all connect. Then, when you bring them physically together in the same space, they unify through the inter-connection of things. They do different things to each other, and unexpected things always happen. There are lots of relationships between time and the relationships between ourselves, each other and the wider universe.’