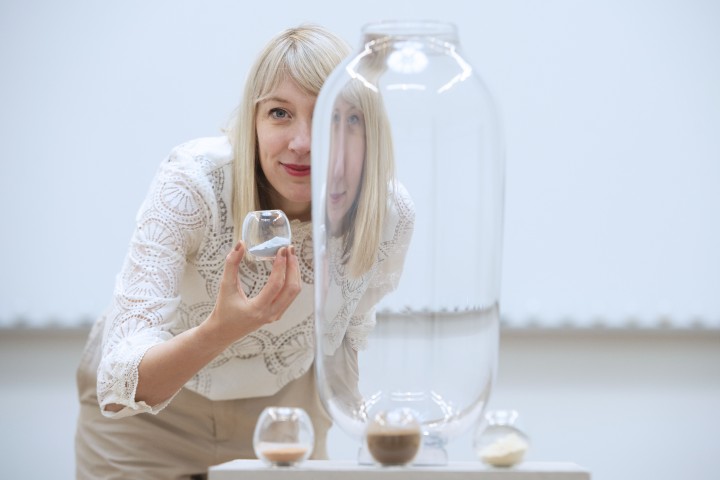 Scottish Artist Katie Paterson with Requiem, an exhibition which tells the life of the planet in a single work. It is to go on display for the first time at Ingleby Gallery, Edinburgh from this week. Until 11 June.

Glasgow‐born artist Katie Paterson (b. 1981) has been bringing dazzling creative concepts to life since the mid‐2000s. Transforming the legacies of conceptualism and minimalism, Paterson uses durational, time‐based and ideas‐led processes to speak to questions of the earth’s distant past, the nature of deep space, the speed of geological and glacial formation, and our relationship with non‐human life at a time of environmental catastrophe. In 2014 she launched Future Library to great acclaim in Norway, planting a forest that will supply paper for a special anthology of commissioned books to be published in 100 years’ time. For her new show Requiem, at Edinburgh’s Ingleby, the artist has sourced geological deposits from every era of Earth’s history. The 364 specimens, stored in vials around the edge of the gallery, will be poured into a glass funerary urn by visitors over the course of the exhibition. Greg Thomas spoke to the artist at her home in Fife about ecology, time travel, and the weight of the soul.

GT: What can you tell us about how your new project came about? When did you first conceive of it?

KP: It was some years ago...I made an artwork called Fossil Necklace (2013) where I carved fossils into beads that spanned all of geological time and were strung on a necklace. I had all the offcuts in my cellar, and I remember having an image of my cellar containing the whole earth [laughs] and thinking how weird that is: to have the remains of all of time in my cellar. I imagined the relics all turning to dust and had the idea of a vessel holding the entirety of the planet. I imagined that the urn would hold the whole of the world’s origins, not only from when life first evolved but way beyond, back to the point when earth began, and even containing material from before the earth existed, through dust from meteorites and asteroids that predate the sun....I visualised a small amount of dust from each moment in life’s history, and then I discovered the idea of the soul weighing 21 grams. This became the amount of dust in each vial: each layer is a little soul. From 1945 on the artwork covers the Anthropocene era. It’s been an intense project, fascinating, deeply involving and all‐consuming.

GT: Was it quite scary gathering materials from the last 50 years and seeing the extent of change they reflect?

KP: Yeah, totally. When I was sorting the objects into a timeline and positioning them next to one another, I was shocked. In the same period as the Iraq War, the first synthetic life was being developed. The fall of the Berlin wall was happening whilst nanotechnology was on the rise. The dawn of the nuclear age happened alongside the growth of the modern day broiler chicken (which now dominates all species with 20 billion alive at any one moment in time). I was building up correlations between major events throughout history. Till the objects sat right next to one other, I hadn’t recognised the deep disparity between them. And the sheer range of events that have happened in a single human lifespan, from 1945 to now, is extraordinary. The artwork contains brick dust donated from the Terezín Holocaust Memorial; pesticides; grass from the paddock where Dolly the sheep grazed; rocks from mountaintop removal mining; leaves from Zombie forests; Soot from Greenland’s Dark Zone; ash from wildfires to name a few. 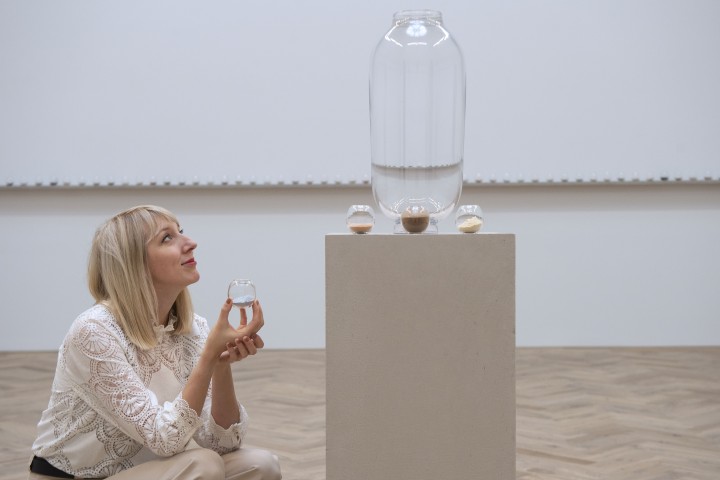 Scottish Artist Katie Paterson with Requiem, an exhibition which tells the life of the planet in a single work. It is to go on display for the first time at Ingleby Gallery, Edinburgh from this week. Until 11 June.

GT: I really like the way you describe trying to reconcile things that don’t quite seem reconcilable. It strikes me that you often try to focus attention on things that are almost impossible to conceptualise, whether that’s because they’re infinitely large or infinitely small, or they unfold at - literally – a geological or glacial pace. Where do you think that desire comes from?

KP: I’ve always been interested in what lies beyond us. I’m quite introverted [laughs] and I’ve always been fascinated by life other than human life – nature, the cosmos, and the more-than-human-world. And although I don’t have a scientific mind I’ve always been drawn to phenomena like starlight and moonlight, meteorites, glaciers, forests, and material from deep within the earth. The infinitely large and the infinitely small come together. The older that I get, the world that we’re creating — I can’t look away. Clearly, artists don’t live in a vacuum. We’ve always responded to the contemporary moment and ours is just so unbelievably potent: from the global pandemic to wars to the environmental crisis. It is overwhelming, and I suppose for me one way to try to try to make sense of this moment is through the lens of the very deep past.  Art is the only language I can use to find a rootedness: to try to find out where we’ve come from, feel our closeness to other civilisations, other lives come and gone. Deep time is something that has always fascinated me, and I feel like I don’t want to just be stuck in this moment. I want to have the freedom to time travel back and forth and try to extend that experience to others in some small way through my work.

GT: Is there an ethical imperative for you in drawing attention to things that are beyond us, the other lives that we’re sharing the planet with, in this moment of crisis?

KP: It’s a tricky question. I never want to be didactic, sending out singular messages. Requiem is full of questions, contradictions. The new show is about putting all this material in front of us and asking: how do we feel? Here is the lineage of where we have come from – from exploding stars to atomic bombs. What now? I hope that when people hold and pour their vials of dust, this moment will stay with them. Say, for example, dust from one of the first creatures to develop eyes and see, or to develop wings and to fly, they can know that they have held that creature: it becomes more present and lasting. As I’ve been gathering the objects, they’ve come to hold a preciousness, and in their compactness even more so. We can hold a remnant of life in our hands: it’s very intimate. The whole project is trying to create intimacy with the beyond.... Concepts of very deep time or very deep future: they are intuitive and emotional. If we have the material right there in front of us, in a configuration that’s never existed before on earth, it gives a wider lens, and perhaps we can connect more deeply with it. Let’s see!