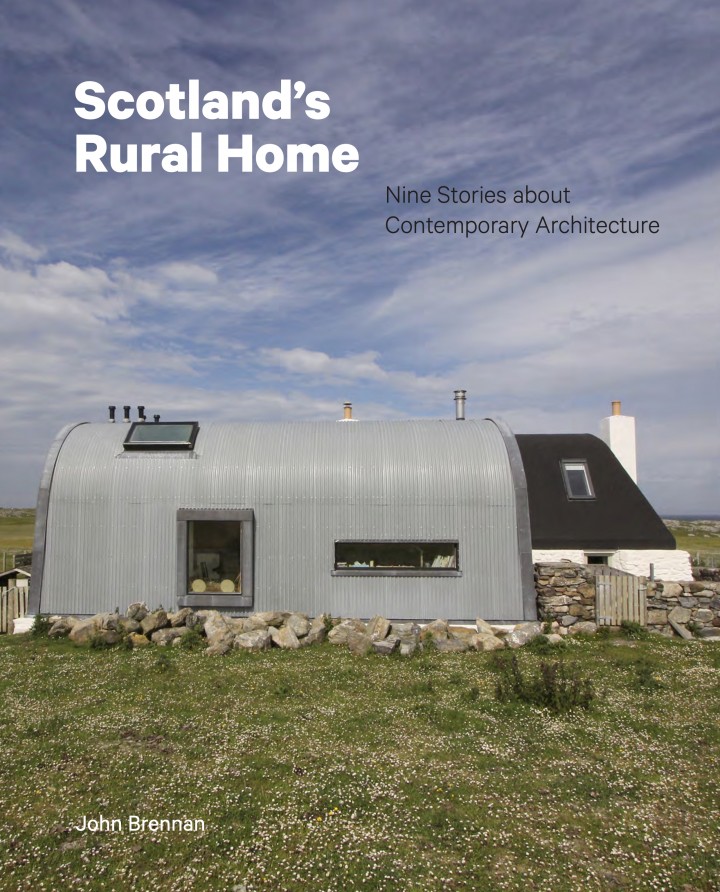 In the introduction to Scotland’s Rural Home, the architect and critic John Brennan, whose background is in ecological design, unpicks some of the damaging stereotypes that have defined conceptions of the rural as it applies in Scotland. Brennan directs his criticism especially towards an “inherently destructive” binary between reactionary views of the countryside as a bottomless resource for exploitation by locals and landowners – through farming, forestry, hunting and fishing – and “post-romantic” conceptions of rural space as an “invigorating obstacle course” for holidaymakers (the phrase is borrowed from historian Chris Smout).

The architecture in this book avoids both pitfalls while at the same time establishing “a deep relationship with its environment that works beyond the visual.” Indeed, the selection of designs is partly intended to “challenge the assertion that, out of town, houses should simply fit in with their surroundings.” Jumping ahead, this argument is given critical depth and piquancy in Brennan’s 9th chapter, which contrasts a traditionalist distaste for modern, “ranch-style” kit houses with the fact that “both the catalogue build and the kit home have been integral to housing in the countryside for close to 300 years.” (This stretches back to an enlightenment-era classicism generally sourced from “pattern books” but now seen, ironically, as “Scottish traditional” architecture.)

The Hen House floating above the site. Image Stephanie Crane.

The author steers us through five themes in all – including kit-house controversy – illustrating each with exemplary works of contemporary building design. In Chapters 2 and 3, Brennan’s considers “the productive landscape and the buildings that provide a sustainable living for their residents.” In the case of the Hen House, a modern crofter’s hut in western Skye, and Darach House in Dumfries and Galloway, a community residence for children and adults with learning difficulties, built on the “anthroposophic” principles of Rudolph Steiner, innovative architecture reflects and facilitates the occupations and social activities of the communities in question. In a sense, Chapter 10 returns us to this paradigm, exploring the construction of “perhaps the last planned village in Scotland,” Strontian in Lochaber.

Chapters 6 and 7 consider how this approach differs on islands, touching on the community buyout of Gigha in the early 2000s: one of a wave of such island takeovers – often from negligent landlords – which surely collectively comprise one of the great triumphs of Scotland’s recent socio-economic history. On Gigha, a new community-commissioned estate at Grianan and Raon Mor helped to increase the island’s housing stock by a quarter, while also reflecting through its design of spaces the multiple economic activities that often sustain island life. Meanwhile, the attractive, coloured timber-frame development of Grodians, on the outskirts of Lerwick in Shetland, seems at first sight to be emulating Scandinavian design, but in fact responds closely to the construction traditions, energy efficiency requirements, and rich colour-palette of its surroundings.

Landscaping in the heart of the development (Grodians). Image Stephanie Crane.

Purely stylistic responses to the rural are rarely Brennan’s concern, although Chapters 4 and 5 touch on the aesthetic reimagining of pre-existing rural architecture, from a farm-stead conversion in Argyll to the extraordinary recladding of an interwar farm cottage above the Tweed Valley, so enveloping in its effect that it makes the resulting structure seem “entirely contemporary.” In Chapter 8, Brennan explores stylistic reactions to the wider architectural paradigms of particular areas, specifically considering a modern take on the distinctive, bulbous thatched roofs and thick stone walls found in crofters’ cottages on Tiree.

Throughout this book, however, effective rural architecture is presented as much more than a matter of appearance. Brennan’s learned discussions are engaged with the deep history of locale, from shifting ecological conditions to millennia of regional economic, social, and industrial history. Scotland’s rural homes, at their best, can reflect and furnish a vision of remote community as equalitarian, ecologically minded, and in harmony with its settings.